Matt Smith: Brexitlands of Wales have shown complacent Welsh Labour that they have somewhere else to go 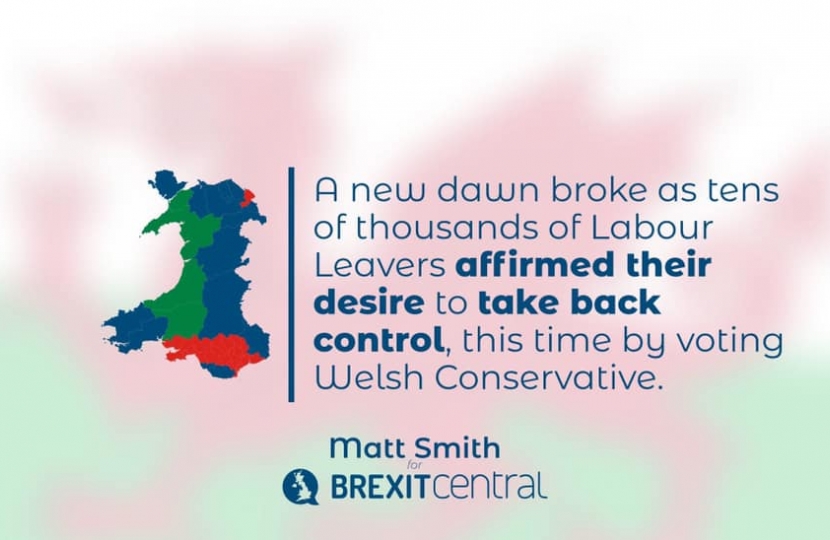 Lord Mandelson once said: “The people of south Wales will always vote Labour because they have nowhere else to go”. The former EU Commissioner was proven wrong by voters last week as Welsh Labour saw the collapse of its North Wales red wall and major inroads from Boris Johnson’s revived Conservatives in South Wales.

There is a sea change in Welsh politics. A new dawn broke as tens of thousands of Labour Leavers affirmed their desire to take back control, this time by voting Welsh Conservative. Welsh Conservatives scaled the ‘red wall’, gaining six Leave-voting seats. In North Wales the Tories won Ynys Mon, Vale of Clwyd, Clwyd South, Delyn and Wrexham. Alyn and Deeside (now a marginal seat) is the only red brick left in the Tories’ blue wall.

In South Wales the Tories took Bridgend from Welsh Labour for the first time since 1983. In Brecon and Radnorshire they took a seventh from the Welsh Lib Dems. In Newport West, a seat once held by Paul Flynn, Welsh Labour held on by their fingernails. And Jeremy Corbyn’s red army was rebuffed in the Vale of Glamorgan despite the Welsh Lib Dems and Plaid Cymru not standing candidates as part of a pro-EU Remainer pact with the Greens.

Former Welsh Secretary Lord Hain called it a “terrible night for Labour”. For Welsh Tories, however, it was their best election result since 1983. On 36%, their share of the Welsh vote was higher than at any point since 1900. This is real progress since the 2017 General Election that saw rising working class Toryism. Back then Welsh Tories took their largest vote share since 1935. Indeed, earlier in 2017 the Welsh Political Barometer had them on 40%.

In that election Welsh Labour was able to claw its way back in part due to the ‘Welsh Labour brand’ fronted by the then First Minister Carwyn Jones and a campaign that omitted any reference to Corbyn. Yet since Jones’ resignation, Mark Drakeford – the ‘Cardiff Corbynista’ – has led the Welsh Labour Government.

Since taking over Drakeford has presided over Welsh Labour’s shellacking in the 2019 European Parliamentary elections, record low polling during the summer (Labour barely kept their deposit in the Brecon and Radnorshire by-election) and the Party’s worst general election result in Wales since 1983.

Collapsing Welsh Labour support in Brexitland has been long in the offing. In May 2016, UKIP broke through in the National Assembly elections. Then in June 2016, Vote Leave won the European Union Referendum despite the Welsh Labour Government campaigning for Remain. At the 2017 General Election, 85% of Welsh voters backed parties committed to leaving the EU’s Customs Union and Single Market. The Brexit Party topped the poll in May’s Euro elections in 19 out of 22 Welsh local authority areas.

Ignoring these portents, Drakeford launched Welsh Labour’s ill-fated general election campaign in Wrexham, declaring that his Government would campaign “unreservedly and enthusiastically” to Remain because “staying in the EU is the right answer”.

Standing alongside Nicola Sturgeon at a Westminster press conference in October he opposed Boris Johnson’s Brexit deal, telling journalists that “Remain is the right way answer for Wales”.

In 2017 the Welsh Labour manifesto stated “Welsh Labour accepts the Referendum result” and will “make Brexit work for Wales”, helping to firm up the red walls. Welsh Labour has since become a de facto Remain party. This is primarily why their vote share in Wrexham (a 58% Leave-voting seat) fell by ten percentage points.

Revoke and woke Welsh Labour politicians who have spent the last two and a half years lobbying the Labour leadership to go full Remain have been rejected by voters who want to ‘Get Brexit done’.

They have consistently refused to make their peace with Wales’ 854,572 Leavers who outnumbered voters for anything at any Welsh election since 1997. There is little evidence that Welsh opinion has since moved towards Remain while opposition to a so-called ‘People’s Vote’ has risen. Indeed, most who voted Remain in Wales did so in good faith that the referendum result would be implemented, with no desire to see the social contract unpicked through a divisive Neverendum.

Welsh Labour has avoided Scottish Labour’s fate thanks to the Valleys seats and metropolitan Wales (in which their vote nonetheless fell) and the weakness of Welsh nationalism. Yet as Matthew Goodwin points out, Labour’s weakening relationship with its working class base does not begin and end with Brexit.

Since 2015 the ‘Corbyn Project’ with its far-left ‘ishoos’ and the politics of the cult has alienated many working-class voters. With a party membership now dominated by what in its own nomenclature are called ‘high status city dwellers’ and a leadership whose five key members are London MPs (three of whom sit for seats in the contiguous London boroughs of Islington and Hackney), the values Labour projects resonate less with its traditional provincial blue-collar base.

Corbyn and Drakeford’s Labour are on the wrong side of a cultural realignment described in David Goodhart’s Road to Somewhere. Their loud ‘anywhere’ values have left their erstwhile provincial blue-collar ‘somewhere’ values voters behind. When Johnson refers to Islington-based Labour politicians who “sneer at your values and ignore your votes”, Brexitland knows exactly what he means.

On election night Lord Hain lamented that “the whole base of the Labour Party dissolved under our feet”. This should not have come as a surprise to anyone on the ground. I canvassed a voter in Barry in the Vale of Glamorgan who was a life-long trade unionist and Labour Party member until this year, who voted Leave in the referendum and for the Brexit Party in May – and now backs Boris Johnson.

A household in a Labour area in Newport West wrote on a makeshift window poster: ‘Unless you want Brexit, don’t bother ringing our bell, thank you!’ Their alienation from Welsh Labour is driven partly by Brexit. However they also doubt Jeremy Corbyn speaks for communities like theirs.

Welsh Conservatives won votes from former Labour supporters to get Brexit done. This gives them a once-in-a-generation opportunity to forge a blue-collar Conservatism of the common ground that improves ‘the condition of the people’ and locks in their support in a new electoral coalition.

Boris Johnson has pledged to “work day and night” to make sure Leave-supporting communities are heard “in the corridors of Westminster and Whitehall” like never before. Politics in Wales is now thankfully more competitive for Johnson’s sunny, upbeat, one-nation, levelling-up agenda.

By contrast, Welsh Labour’s ‘give back control’ agenda has cost it the support of Leave-voting communities in seats hitherto considered part of Labour’s heartlands. The routing of many strongly Remain Welsh Labour parliamentary candidates and rising Welsh blue-collar Conservatism shows Wales does have somewhere else to go.