Matt Smith on Conhome: Wales shows how the Conservatives are building a new electoral coalition 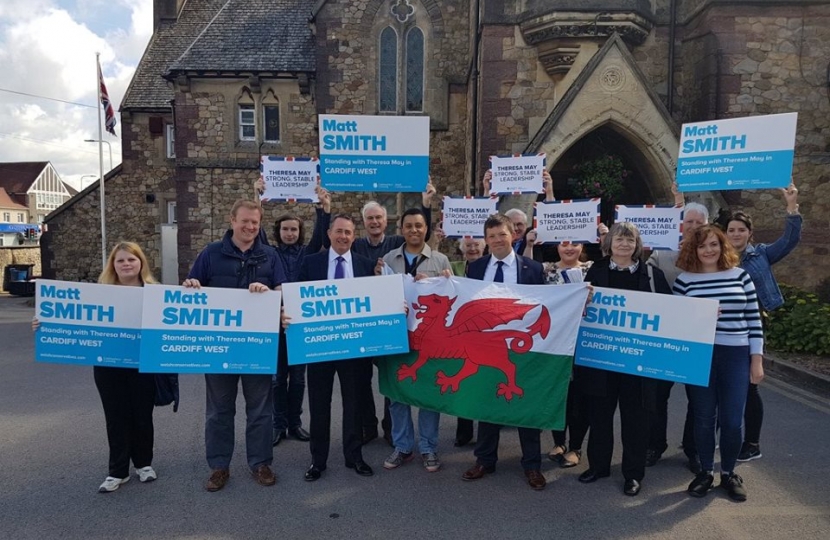 It was a privilege to stand for Parliament in Cardiff West in the recent General Election, a constituency with personal significance for me as a born-and-bred Cardiffian with family links to Ely and Canton.

Cardiff West was a seat we last won with the late, great Stefan Terlezki in 1983 (the year I was born). Terlezki won the Labour-held seat by focusing on erstwhile Labour voters disillusioned by the loony left.

Although I grew up two streets away from where Jim Callaghan once had a constituency flat, I have never been convinced by Labour’s sauvignon socialists, who seemed more interested in pulling up the ladder on working people than standing up for local communities.

We have begun to build a new Conservative electoral coalition. As the Guardian newspaper wrote: “more working-class voters came out for the Conservatives and the party increased its share of the C2DE voters by 12 points”. We should not overlook this when trying to put Corbyn’s transient protest-vote surge in its proper context.

We saw this rising in working-class support first-hand in Cardiff West. We collected more than seven thousand voting intentions from over ten per cent of the electorate, and the number of Conservative pledges recruited directly from former Labour voters was very close to the 2,860 additional Conservative votes we secured on polling day.

Former Labour voters who backed us included a former docker, a steel worker, a coal miner, a police officer, a fireman, a single mother looking to set up a support group for other single mothers, a clergymen, and even a ‘life-long socialist’, who could not bring himself to vote for Jeremy Corbyn’s Labour Party.

For them, Labour’s leadership represents the “impossiblism” that Neil Kinnock talked about in his fight against Militant when he said: “It was almost as if sections of the party measured the purity of their socialism by the distance they could put between it and the minds of the British people.”

The prising away of Labour’s dead-hand stranglehold over South Wales has been long in the making. In May 2016, UKIP broke through in the National Assembly elections, winning the support of many former Labour voters. Then on 23 June 2016, Vote Leave won the European Union Referendum in Wales, with 53 per cent of the popular vote on a 72 per cent turn out, rejecting Labour’s instructions.

On 24 April 2017, ITV Wales published Professor Scully’s Political Barometer Poll which put the Conservatives ten-points ahead, – a result which would have seen us gaining ten new seats and a majority of Welsh constituencies for the first time since 1859.

In the event, we won 528,839 votes, the highest number we have ever secured in Wales. This amounted to 33.6 per cent of the Welsh vote, the highest we have achieved since 1935. We gained votes in 39 out of the 40 Welsh seats. In Cardiff West we secured the largest number of Conservative votes since 1992. Welsh politics is now ‘unfrozen’.

Firstly, Labour’s local elites have lost touch with the values of the people their party was founded to represent. As their electoral coalition diverges, the gulf between Labour voters in South Wales and Jeremy Corbyn’s Islington coterie becomes ever more unbridgeable.

Ahead of her speech at Brackla Community Centre in Bridgend, Theresa May told the Western Mail that Brexit’s quiet revolution had been “particularly profound here in Wales, where that sense that there is a serious gulf between politicians and the people is particularly acute.”

The great values divide in British society has been described as falling between people who see the world from the vantage of anywhere and the people who see it from the position of somewhere. Successful parties need to appeal to the cultural and material interests of ‘Somewheres’ as well as ‘Anywheres’.

It was the ‘Somewheres’ values clusters in Labour’s electoral coalition that we reached out to in Cardiff West: those whose ascribed identities are alienated by Corbyn’s ‘New Politics’ and who were persuadable on Brexit, immigration, NHS investment, infrastructure, jobs and industrial strategy.

Secondly, Labour’s overlong incumbency has led to complacency and a sense that they take public office for granted.

The red princes and princesses of their governing class have enjoyed chauffeur-driven ministerial cars, chartered jet-setting, super-remunerated SpAds, and handed favours to their trades union paymasters.

Yet Welsh Labour’s ancien régime has presided over one social justice failure after another: ever worsening educational outcomes, cuts to the Welsh NHS budget, and a failing Communities First anti-poverty program. As Labour historian Kenneth O. Morgan wrote: ‘Welsh socialism and radicalism have lapsed into insular isolation’.

Perhaps an awareness of the disillusionment of long-neglected local communities explains the negativity and defensiveness of Labour’s campaign in Cardiff West. Labour’s Welsh Campaign chairman Wayne David MP told the Western Mail there would be no “shady pacts and backdoor deals with other political parties.”

Yet in the event, Labour retreated into cartel politics, aiming to hang on to the seat with what Wales Online called a ‘wholly unprecedented’ intervention from a former Plaid Cymru leader, imploring Plaid Cymru, Lib Dems and Greens to vote tactically to keep Labour’s candidate in office.

Labour set out to scare their ‘core vote’, with Kevin Brennan saying to the South Wales Echo: “I’m always nervous at election time, but this time I think there’s is a real possibility that I could lose.”

Despite telling my opponent in person I wanted a clean contest, Labour resorted to misdirected personal attacks, perhaps because they thought they had no arguments that would resonate with the electorate, despite having held the seat since 1987.

In the end, as the election became a referendum on the size of the majority the electorate wanted to give the Conservative Party, many otherwise disillusioned Labour voters may have thought it ‘safe’ to vote Labour in the belief they would still get Theresa May as Prime Minister.

The next time Labour faces the electorate it will be far more difficult to balance the different elements of their fissiparous coalition, especially when traditional Labour voters price-in the serious risk of ending up with Corbyn’s politburo in Downing Street.

It will be harder in future for Labour candidates in Wales to wear two hats: distancing themselves from Corbyn in front of voters, sending endorsement letters from Carwyn Jones, and then taking up portfolios in Corbyn’s Shadow Cabinet once polling day is safely past. Will Corbyn’s cynical ‘bait and switch’ continue to work on students when the Chavistas have become apologists for Maduro, Welsh Labour increases tuition fees, and the sprayed-on halo begins to slip?

The new Conservative voter coalition can be the natural home for Labour’s ‘taken for granted’ patriotic working-class vote, alienated by the left-wing identity politics of the post-communists running the modern Labour Party.

We can best achieve this by getting on with the job of delivering a clean and successful Brexit, and by implementing our manifesto commitment to deliver a country that works for the many and not the privileged few.