Matt Smith: Plaid Cymru is the party of Wales in name only 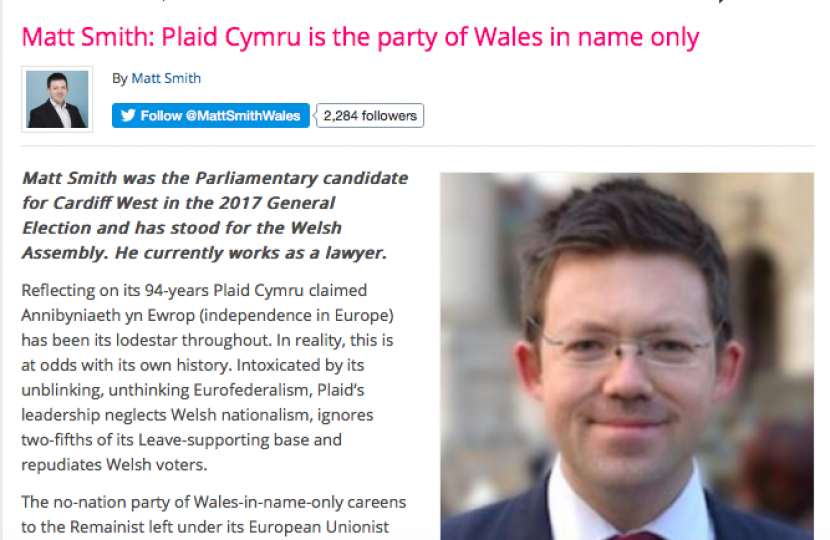 Reflecting on its 94-years Plaid Cymru claimed Annibyniaeth yn Ewrop (independence in Europe) has been its lodestar throughout. In reality, this is at odds with its own history. Intoxicated by its unblinking, unthinking Eurofederalism, Plaid’s leadership neglects Welsh nationalism, ignores two-fifths of its Leave-supporting base and repudiates Welsh voters.

The no-nation party of Wales-in-name-only careens to the Remainist left under its European Unionist leader Adam Price (a man with a degree in European Communities Studies). Plaid’s ‘Give Back Control’ agenda now means it is either for the elitist nullification campaign for a so-called People’s Vote or revocation of Article 50 to cancel Brexit in a General Election if a clean no-deal Brexit is in prospect.

Disappointingly for Price, Wales’ silent majority has an identity that is stubbornly Welsh and British. Brexit shows the Welsh conceive their sovereignty as shared with the United Kingdom home nations yet without the EU. The sine qua non of Unionism is elections to the United Kingdom Westminster Parliament. In the 2017 ‘Brexit General Election’, Welsh turnout was higher than in Scotland, Ulster and only marginally lower than in England.

Most see the Union as Cymru Fydd (Wales of the Future) did over a century ago. The Young Wales Movement saw nationalism entailed not separation from but equality and Union with England that provided ‘the best opportunity that Wales could have to deliver its mission… to the world’.

Plaid’s counterfeit nationalism matters because it is a legacy gatekeeper over Welsh nationalism. Their virtue-signalling leadership conflates Wales with the discreditations of Cardiff Bay’s failing devolved governing class and the Brussels ancien régime. Plaid glamourises these out-of-touch elites and would deprive England, Scotland and Ulster of the Union in all its variety.

What drives Plaid’s anti-nation state nationalism is not Wales, but the ‘negative nationalism’ and left-wing ‘Anglophobia’ George Orwell described in his Notes on Nationalism. Orwell saw that within the English intelligentsia ‘a derisive and mildly hostile attitude towards Britain is more or less compulsory’.

This explains Plaid’s ‘post-colonialist’ anti-British rhetoric. It is on all fours with the reparations credo of the anti-imperialist Corbynistas. Despite Wales’ martial prowess neither side with Britain in a conflict however abominable the alternative. They should be standing candidates in the London Borough of Islington.

Plaid’s hollowed-out, transferred nationalism is for the EU and the sacral cause of European integration. Yet Welsh nationalism was not always seduced by European Union nationalism and Verhofstadt’s European empire.

In the General Elections of October 1974 its manifesto declared ‘Plaid Cymru is, and always has been, opposed to membership of the EEC’. Through ‘Wales Get Britain Out’, Plaid distributed thousands of ‘Dyweded Cymra NA’ (Wales says no) bumper stickers.

Their Euroscepticism was driven by three things.  Firstly, Gwynfor Evans feared the Community would create a ‘common Western European Man’. Though not an ‘Englishman in disguise’ there would be ‘precious little Welsh about him!’ Welsh Nation predicted the Community would secure ‘the death of Wales as a national entity’.

Secondly, the Treaty of Rome was ‘solely concerned with the rights of capital’ and ‘Europe’s privileged rich elite groups’. Former Plaid General Secretary Emrys Roberts lamented Europe’s lack of ‘social conscience’ and its ‘naked market and profit-oriented capitalism that rejects any attempt to influence its development in the interests of the community’. He feared people ‘were conceived of as raw material, not Welshmen’.

And finally, Plaid feared freedom of movement would depopulate Welsh-speaking rural Wales. Ever closer union meant ‘local communities [and] national identity counted for nothing’. The Community’s concern was rather to provide ‘the capitalist with enough workers to just where he wants them’. The achingly Europhile Lord Dafydd Ellis-Thomas then claimed ‘the philosophy of the Common Market’ was ‘to drag people away and destroy their community’.

Regionalism became the framework for the state-building ambitions of Plaid’s would-be governing class. L’Europe de regions provided paraphernalia for regionalist parties making secession manageable so long as England, Scotland and Ulster were also in. Plaid is now in the contradictory position of wanting to enmire Wales in an homogenising, mono-cultural EU, that ignores Madrid’s treatment of Catalan politicians.

Brexit is an existential crisis for Plaid because it answers calls for independence. Brexit also challenges the ‘Welsh effect’ as politics in England and Wales moves closer, sinking their self-image of Wales as more left-wing and supranationalist. Along with 57% Leave-voting Cornwall, Wales’ Brexit scotches nationalist-remainer claims that Eurosceptic England is dragging the Celtic fringe out while also wrong-footing Plaid’s SNP doppelgangers.

Brexit Derangement Syndrome leads Plaid into bad company. It works for notionally unionist parties in Parliament that serve neither Plaid’s nor Wales’ interests. In a Freudian slip their Westminster Leader Liz Saville Roberts said her “number one priority must be… delivering a referendum and cancelling Brexit”. She backs Corbyn for Prime Minister to block Wales’ Brexit, and opposes a General Election to deny Wales its say. Ridiculously they also call for the impeachment of Prime Minister Boris Johnson.

Welsh nationalism was off the ballot paper in the Brecon and Radnorshire by-election as Plaid backed their League of Losers ‘Remain Alliance’ Lib Dem partners. Voters now see a cartel. Where the Lib Dems go, Plaid now follows. They now have a Brexit policy that is illiberal, anti-democratic and at odds with a large chunk of Plaid’s base.

In Cardiff Bay, their former leader Leanne Wood’s first response to Wales’ Brexit vote was to seek coalition with Welsh Labour. Cahooting with Welsh Labour decline managers and contradicting devolution, Plaid has used the Senedd as a platform to prognosticate on matters ultra vires. Plaid’s Chief Whip backs Welsh Labour on the Senedd Business Committee to block publication of the inquiry into the tragic suicide of Welsh Government minister Carl Sergeant while Plaid protests about prorogation.

And Plaid’s Leannista tendency is in hock with the divisive identitarian left. Wood swears at alleged transgressors of woke, provoking the Standards Commissioner Sir Roderick Evans and Assembly Members to censure her 37-12. Yet she thinks nothing of sharing a cartoon comparing Leavers to Nazis.

Palling around with metropolitan England’s Brahmin left and Cardiff Bay’s Brexit meltdown are convenient distractions from the hard work of making a success of devolution.

Plaid’s hard Remain politics ignores Wales’ 854,572 Leavers. Forty per cent of Plaid voters told the Welsh Political Barometer (30 June – 4 July 2016) they had voted Leave. Leave beat Plaid in three out of four of its Westminster constituencies and half its Senedd constituency seats. Eight of the ten most Welsh-speaking local authority areas voted Leave in 2016 and went on to place the Brexit Party in first place this year.

Pitch-rolling on the Andrew Marr Show Saville Roberts claimed support for separatism within the EU is as high as 41% prompting Professor John Curtice’s rebuke “the typical poll rating Liz is about ten percent in Wales”.

Perhaps the only independence Plaid is interested in is that of its own elites from the rest of Wales. Yet YouGov’s Brexit policies poll (24th-25th September) found 47% of Welsh voters see Plaid as anti-Brexit (and only 3% pro-Brexit) posing a strategic dilemma for Plaid. Riding around Cardiff Bay on a blue and gold unicorn won’t play well with the Leave-supporting communities Plaid is targeting for the 2021 Senedd elections.

Indeed YouGov’s Sunday Times poll (26th-27th September) found more Welsh voters (49%-29%) prefer permutations of Brexit to Remain. Forty two per cent are not worried about No Deal. Over a third think the Supreme Court biased and with judges opposed to Brexit. And more believe anti-Brexit politicians use aggressive and divisive language than Leavers.

Plaid squandered Wales’ Devolution Dividend by propping up Welsh Labour in Cardiff Bay. These EU-puppets would now deprive Wales of its Brexit Dividend. Wales needs a genuinely patriotic party not a regionalist surrender party of Brussels courtesans who would reduce Wales to a voiceless province in the EU’s soft empire.