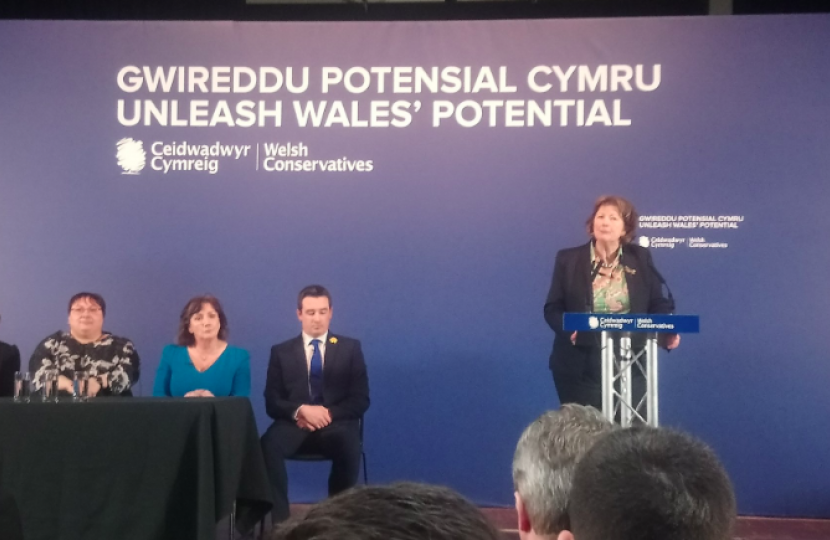 Angela Burns AM/AC – the Shadow Minister for Health – made a well- received speech at Conference in which she announced her plan to introduce the Nursing Apprenticeship Route to both reverse the shocking nursing recruitment deficit seen under Welsh Labour, and to open nursing up to more people.

The scheme – to make nursing, nursing associate and health assistant apprenticeship degrees to be available across Wales – would revolutionise training and remove barriers, such as a lack of opportunity, confidence, qualifications, and life events that have stopped potential nurses from pursuing this career.

“Nursing apprenticeships would be a key strand of career options within the NHS.  But we recognise that they aren’t a standalone solution and traditional routes will remain, such as university degrees, post-graduate diplomas, international recruitment and return to practice schemes.

“But, at the very least, giving the option of apprenticeships will attract more people from a wider pool and we believe “earn as you learn” apprenticeship degrees will help more people get their foot in the door – at any age and from any background.

“We believe this would mean more nurses filtering into the Welsh NHS and, as part of our 'Recruit, Re-skill, Retain' approach to the NHS workforce, would reduce our costly reliance on agency nurses.”

Mrs Burns added that the proposed model of apprenticeship would also be applied to other aspects of the health and social care system as part of a wider review of the workforce.

“It has never received an equal focus by the Welsh Labour Government as they give physical health.

“Over the next few months, we will delivering a series of commitments to more effectively fund and deliver mental health services and address some of the issues that have been highlighted.”

She said that, under a Welsh Conservative Government “… mental health will no longer be a Cinderella Service, but rather the belle of the ball.”

Mrs Burns said that priorities will be to tackle suicide, which is a major cause of death for people aged 15 to 44, with males making up some 75 percent of those who die.

New mothers, too, would become another priority group, with up to one in 10 experiencing post-natal depression, with depression and anxiety also affecting between 15 and 20 percent of women in the first year after childbirth.

“However, in Wales, we have no specialist care to support mothers, children and their families, so mothers when they are at their most vulnerable are taken away from their vital support networks or simply not given the right care.”

“No-one can overstate the immense dedication and value of those working within our beloved Welsh NHS or within social care, but time after time, they are let down by this failing Welsh Labour administration.