Paul Davies sets out his vision for a Welsh Conservative government 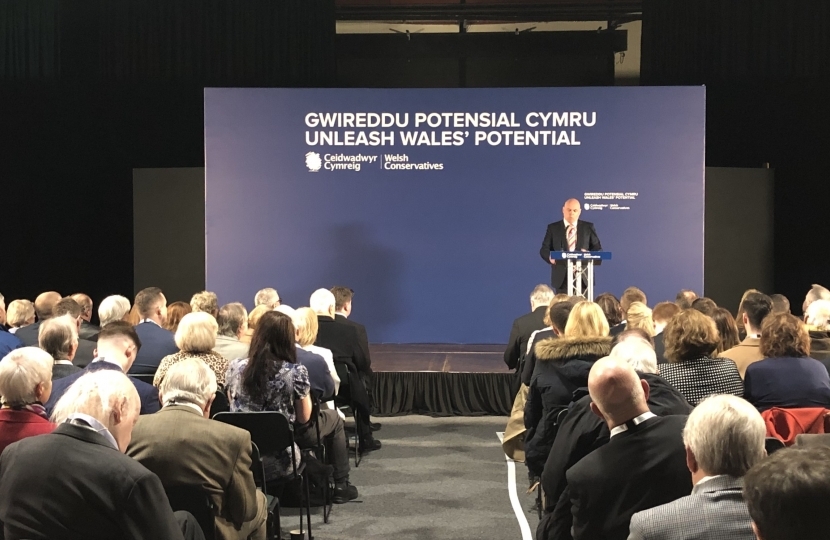 At the annual conference, held this time in Llangollen, he not only challenged the weak and failing Welsh Labour administration, but delivered his plan to revitalise and radicalise the work of the Welsh Parliament.

“We have had devolution, now we need a revolution, from the inside of government.”

His speech tackled the north-south divide that has been opened up under Welsh Labour, ably demonstrated, he said, by its attitude to areas of the north hit by the recent storms and floods. He added that Welsh Conservatives will deliver a fairer local government funding settlement, that serves north, mid and west Wales as well as Labour’s favoured cities in the south.

Perhaps most radical, however, was his plan to tackle profligacy and waste within government.

“A Welsh Conservative Government will cut the cost of politics. We will seek to freeze the Assembly Commission’s budget for the full five-year term, and there will be no increase in the number of politicians in Wales under my leadership.”

“I will reshape the government too.  I will reduce the size of the Welsh Government from 14 ministers to a magnificent seven. A 50-percent saving on day one, and I will implement an immediate freeze on hiring more and more civil servants.”

His speech also included a further pledge to give the people of Wales a leaner, more efficient, and effective government.

Mr Davies spoke of creating an Office of Administrative Responsibility – similar to the Office of Budget Responsibility in England – that would have, as he said, “… a wide remit to look at every way that government works and ensure that taxpayers’ money is spent well”.

He said, too, that a Welsh Conservative government would implement a total Comprehensive Spending Review and eliminate waste, and he vowed that – when he becomes First Minister – he will “… do everything I can to get your taxes down”, vowing:

“And let me make one thing absolutely clear: there will be no new taxes under my Welsh Government.”

Before calling on all residents in Wales to back him as Boris Johnson was backed in the 2019 General Election, he said:

“We need bold decisive leadership in both London and Cardiff Bay for Wales to move forward. With me as your First Minister and Boris as your Prime Minister we will deliver for Wales.

“And you will have a government that rewards your hard work, delivers a bold agenda, leaves no one and no community behind, because together, we can unleash Wales’ potential.”

“The reaction from the audience here was clear: they want the NHS to be effective and well funded. They want better education for their children. They want no more taxes. They want all parts of Wales to be treated fairly, not just the Cardiff Bay Bubble and the M4 Corridor. They want business – at all levels – to thrive.

“Their applause gave a clear message: they want change, and a Welsh Conservative Government will deliver it.”