Prime Minister's article in the Telegraph 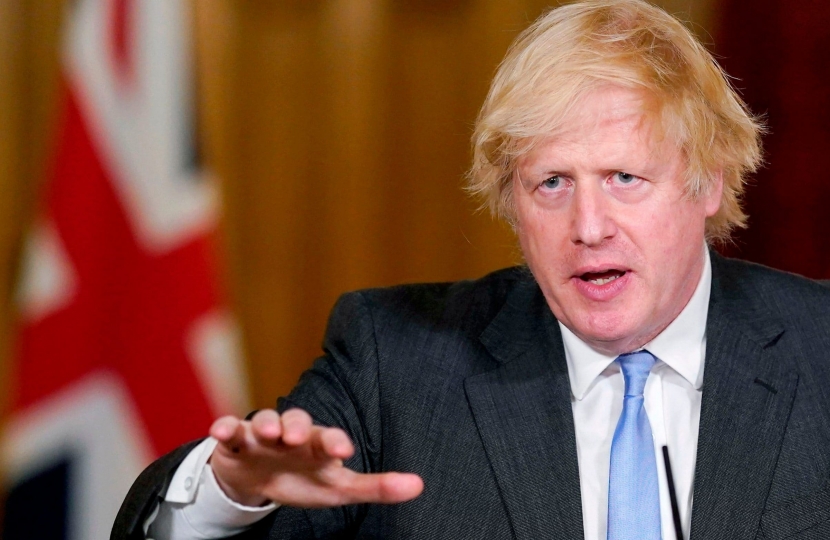 It is now more than seven months since this country left the EU on Jan 31, and since then we have been working hard to build what I am sure will be a great new future relationship. We want a thoroughgoing free-trade deal. We want a deal like the one between the EU and Canada; and since we currently conform with every jot and tittle of EU regulation, and since we have been loyal and paid-up members for more than four decades, it strikes me that if the EU is willing to offer these terms to Canada, then it makes sense to offer the same to us.

Our partners know that whatever happens, the UK is their friend, their biggest single export market, and committed forever to the peace and security of the European continent. They know that there are ways in which we want to continue and even deepen our relations – not just in trade. As I have never tired of saying, we have left the EU, but we have not left Europe. But they also know – or at least they know now - that leaving the EU means that the UK is serious about its newfound sovereignty. In forging our new relationships, we can’t have our lives or our economy regulated by the European Court; we must have the right to devise our own laws and regulations. And we must have sole control of our spectacular marine wealth – our fisheries.

Those are some of our conditions, and in the last few months I believe we have made considerable progress. If both sides want it, there is a great free trade deal there to be done. So I have become anxious in the last few weeks to discover that there is an obstacle. Our negotiators believe that there may be a serious misunderstanding about the terms of the Withdrawal Agreement that we reached last October. You may remember those days. They were torrid. We were negotiating with one hand tied behind our back, since parliament had voted to deprive the UK side of the right to walk away. We had a deadline of October 31 – which parliament decided to flout. MPs were in a state of constant turmoil and recrimination. And yet, provided it was applied in good faith, the Withdrawal agreement we reached was extremely good.

We excised the baleful presence of the Northern Ireland “backstop” – which effectively kept this country locked in the EU’s legal orbit, forced to accept EU laws, unable to do free trade deals. We made sure that Northern Ireland was explicitly recognised as part of the customs territory of the United kingdom, and able to take part fully in new free trade agreements (such as the one Liz Truss has just done with Japan). And we also took steps to protect free movement at the all-important border between Northern Ireland and Ireland. We agreed that in some limited ways Northern Ireland would continue to conform with EU law for four years. We agreed that this limited alignment would end, unless the Northern Irish assembly voted to continue it. We agreed to do some light-touch checks on goods arriving in Northern Ireland, in case they should go on to Ireland, in order to avoid checks at the North-South border. And on the basis of that excellent deal we left the EU – and so it is deeply regrettable that what seemed so simple and clear to us is seen very differently by our EU friends.

We decided in the Withdrawal Agreement to create a Joint Committee, in which we would thrash out the details of these new arrangements. It is here that things risk coming unstuck. We are now hearing that unless we agree to the EU’s terms, the EU will use an extreme interpretation of the Northern Ireland protocol to impose a full-scale trade border down the Irish sea. We are being told that the EU will not only impose tariffs on goods moving from Great Britain to Northern Ireland, but that they might actually stop the transport of food products from GB to NI.

I have to say that we never seriously believed that the EU would be willing to use a Treaty, negotiated in good faith, to blockade one part of the UK, to cut it off; or that they would actually threaten to destroy the economic and territorial integrity of the UK. This was for the very good reason that any such barrier, any such tariffs or division would be completely contrary to the letter and the spirit of the Good Friday agreement. By actively undermining the Union of our country, such an interpretation would seriously endanger peace and stability in Northern Ireland. This interpretation cannot have been the real intention of those who framed the protocol (it certainly wasn’t ours) – and it is therefore vital that we close that option down.

We want an agreement in the Joint Committee, on how we can implement the protocol. We have consistently shown that we are willing to help our friends – to the extent that is possible and reasonable – to protect the integrity of their Single Market, and to keep a fluid North-South border. But we cannot leave the theoretical power to carve up our country – to divide it – in the hands of an international organisation. We have to protect the UK from that disaster, and that is why we have devised a legal safety net – in the UK internal market Bill – to clarify the position, and to sort out the inconsistencies. This Bill protects jobs and growth across the UK, by preventing barriers to trade between the nations and regions. It means that anything approved for sale in Scotland or Wales must be good for sale in England or Northern Ireland, and vice versa.

The Bill gives freedoms and certainties for businesses and citizens that were previously set out in EU law. That is why, as we now come out of the EU, this Bill is absolutely vital. It is now also clear that we need this Bill to protect the free flow of goods and services between NI and the rest of the UK, and to make sense of that commitment in the EU withdrawal agreement – that NI is part of the UK customs territory. It is therefore crucial for peace, and for the Union itself. We must get this Bill through. So I say to my fellow parliamentarians that we cannot go back to the dark days of last year – the squabbling that so undermined our negotiators. If we fail to pass this Bill, or if we weaken its protections, then we will in fact reduce the chances of getting that Canada-style deal. As it happens, I believe that this country will prosper mightily in either event. We could do very well indeed if we left on Australian terms.

But there is no doubt that in the short term at least the Canada deal would be better and smoother – and that is what we are pitching for. So let’s end any potential for misunderstanding. Let’s remove this danger to the very fabric of the United Kingdom. Let’s make the EU take their threats off the table. And let’s get this Bill through, back up our negotiators, and protect our country.