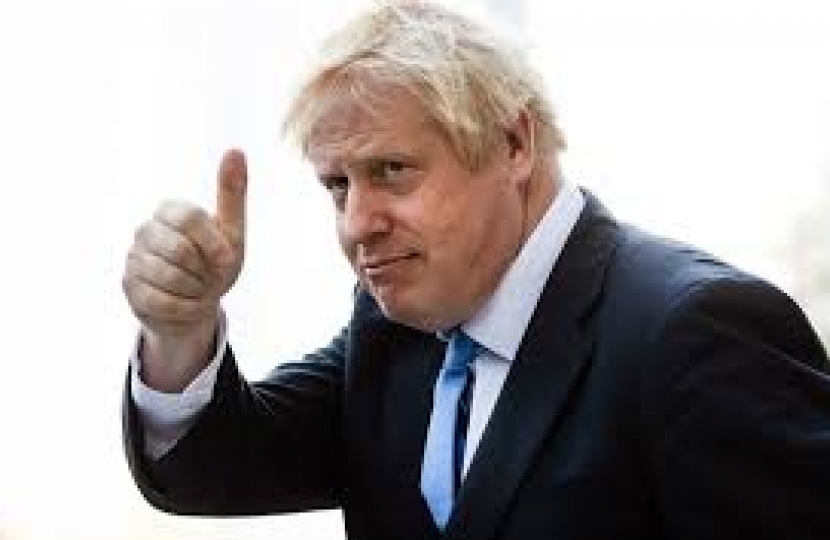 Thank you very much for that welcome and I’m very, very proud to be standing here in front of this incredible creation which of course symbolises my message to you this morning.

Because it is designed by the same man who sculpted the beautiful domes of the London Routemaster bus.

I’m proud also to be the first Prime Minister of the UK to be born in New York – a very, very, very expensive decision that that turned out to be.

And it’s a very exciting time in our country, we’re getting on with delivering Brexit and I just want to say a word or two about that.

Because there’s been a court case in our country this morning of which I – it would be remiss or wrong of me not to address that directly and we’ve got our friends from the UK media here as well - and I just want to say to everybody watching back home for the avoidance of doubt, I have the highest respect of course for our judiciary and the independence of our courts

But I must say, I strongly disagree with this judgement, and we in the UK will not be deterred from getting on and delivering on the will of the people to come out of the EU on October 31st.

Because we were mandated to do.

And we will simultaneously refuse to be deterred from delivering on what I think you will all expect to be an exciting dynamic, domestic agenda intended to make our country even more attractive to live in and to invest in.

So we are pushing on with infrastructure, investing in police, investment in our NHS and to do that we will need a Queen’s speech to set out what we are going to do.

And I think frankly, that is what the people in my country of the UK want to see.

Anyway that’s what you need to know about what’s happening in the court today.

But I can tell you that under any circumstances, court judgements or otherwise my heart lifts when I come to New York.

There’s something amazing, the snap, fizz, the energy in this city.

I love the blue sky, against the sky scrapers, the weird strange Martian water towers on the tops of the buildings.

It’s the things that in New York you never find anywhere else.

But there are many ways in which New York and London are not just similar but actually united.

And it isn’t just that we share a language – kind of.

We have a basic idea of freedom, the idea that common to our democracies.

That if you obey the law and you do no harm to others then you can come and live your life as you please.

Without being judged or censured.

And so you get this cyclotron effect the flash of inspiration that leads to innovation and to prosperity and growth.

And very often it will be a synthesis between American and British ideas.

We invented for instance the underground train.

You invented the safety brake elevator - take them together and you’ve got the recipe for a metropolis.

And you can see the same fusion today across our cities in every sphere from tech to the arts to newspapers.

You know the figures, actually they’re going up I think around 1.2 million US people employed by UK companies and a million or more in the UK,

Trade now worth 200 billion a year, going up the whole time.

But to cut to the chase, we now want to do so much more – because our country is going up.

And on October 31 the UK intends to be more global, more outward-looking and more committed to the rest of the world than ever before.

And we are going to take advantage of all the freedoms that Brexit can give.

Whether that is new tax allowances for investment.

Or speeding up public procurement contracts.

Or devising better regulation for sectors in which the UK leads the world – whether that’s bioscience or financial services or whatever.

More competitive tax rates and the best skilled workforce in the hemisphere.

And so I say to everybody who’s done me the honour of coming this morning to this breakfast, we will roll out the red carpet for our American friends.

And we are increasing the number of visas for scientists.

We are ensuring that your brilliant students can stay on for two years so as to get real value from their studies.

And so that our economy in the UK benefits from their expertise.

We are even ensuring that US visitors are able to use the electronic e-passport system at Heathrow.

And yes - we want to do the much wanted free trade deal. I’m not saying it’s going to be easy because there will be things that we do not want our NHS to be on the table, and there will be differences.

And I am glad that President Trump has set up the special relationship economic working group.

Because it is absolutely absurd that there should be tariffs on Californian wine.

Or that British shoppers should be pay over the odds for Florida orange juice.

But it is also absurd and indefensible that the population of America to the best of my knowledge has gone for decades without eating a morsel of British lamb, or beef.

And I have discovered that anyone wanting to sell socks to the United States.

I think they at least face a tariff of up to 19 per cent. I was told that some kinds have been taken to a laboratory and set fire to twice.

There are only certain ports in the United States that are licenced to receive British cauliflower.

And the US military are banned from buying British tape measures as though there was still some kind of general prejudice still against British rulers.

So I ask you, my friends, is this really necessary?

Let us work together to break down these barriers that have been devised by bureaucrats.

Because all the evidence of the last two centuries is that free trade is the fastest and most effective way to increase the prosperity of our people.

This year our country the UK takes a giant step out into the world.

In keeping with our traditions but also with our new ambitions.

To build on our friendships and relationships with our friends in Europe, the US and Canada.

We do it with confidence to make Britain the best place in the world to start, to build and to run a business.

The place you will want to be.

The place you will want your business to be.

And that’s why I say to everyone here – come and join us.

Thank you very much.