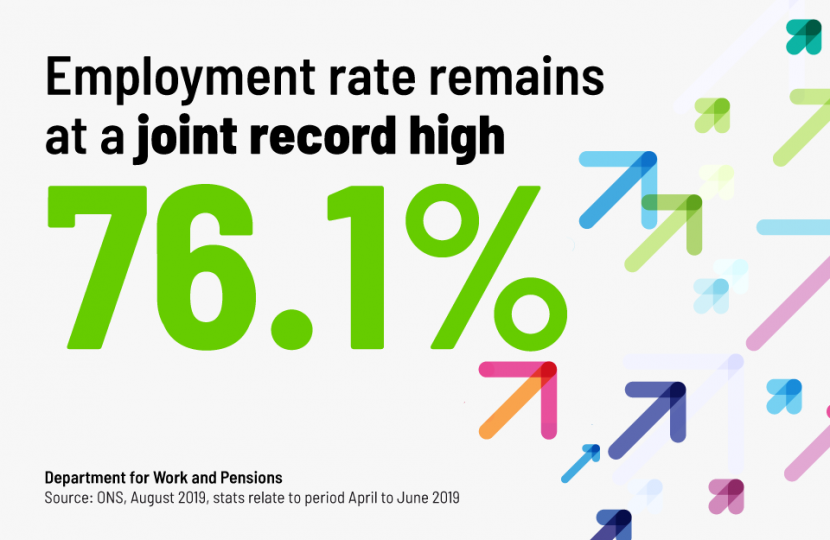 New figures from the Office for National Statistics also show the UK workforce is more gender diverse than ever before, with the number of women climbing to a new record high and ethnic minority employment rate at a near record high, now making up 51% and 32% of employment growth respectively since 2010.

Sectors such as manufacturing and construction are experiencing the big increase in number of jobs, with 85,000 more people employed in the last year.

Wages are also on the up this month outstripping inflation for a 17th month, boosting consumer confidence and spending power for millions – with real term total wage growth hitting 1.8%.

Meanwhile UK unemployment rate remains steady at 3.9% - as the number of unemployed people continues fall in every region of the UK since 2010.

Secretary of State for Work and Pensions and Minister for Women and Equalities, Amber Rudd said:

More people in work than ever before means more households across the UK are earning a regular income, and millions more receiving a pay boost thanks to wages rising at their fastest in a decade – outstripping inflation for a 17th month in a row.

Our workforce increasingly reflects our vibrant society, with a record number of women in employment while the number out of work falls to an all-time low.

This week many young people will receive their A level results and begin their career journey. They should know that they are entering a workforce that is flourishing and full of opportunity and I hope all young people, especially women, feel empowered to flourish in every role in every sector.

The government is helping even more people benefit from a well-paid job by: