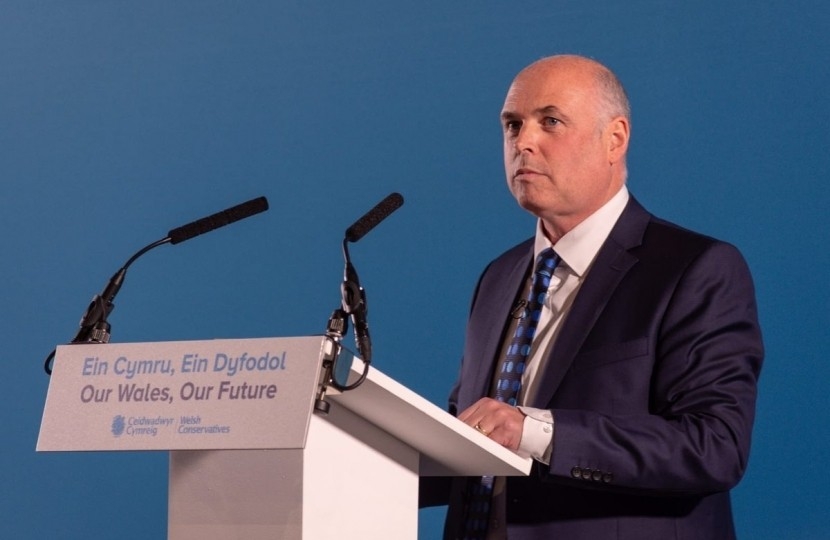 Catch up on Welsh Conservative Leader Paul Davies' speech on Youtube or read the full text below:

We have all had pause to think during the last four difficult months.  As the Welsh Conservative leader in the Welsh Parliament, I want to share some of my thinking with you.

In Boris Johnson’s speech at the end of June on reshaping government, he spoke about how parts of government seemed to respond so sluggishly that “sometimes it seemed like that recurring bad dream when you are telling your feet to run and your feet won’t move.”

Regardless of political colour the sluggishness of governments across the United Kingdom has been ignored for decades and for many people in Wales it feels as though this sluggishness has been allowed to flourish.

The UK machinery of government does need an overhaul. And if that’s true, then the way the Welsh Government works needs an even bigger shape up. The paralysis of delivery is the worst disease affecting public policy in Wales. Even people who won’t say that publicly, admit it privately.

The question I think people need to ask themselves is what exactly is wrong with trying to shake things up? Is governance in the UK so perfect that it doesn’t even need improving? And what on earth makes the Welsh Government think it can carry on as it has done for the last twenty years?

Maybe that’s the First Minister’s biggest failing. Mark Drakeford may have been in the Senedd for less than a decade, but he’s been at the heart of government for over twenty years - and as Rhodri Morgan’s senior special adviser for a large chunk of that. The defensiveness and inertia of systems has never been so hard wired.

Even the little things just carry on, year on year, with not enough attempt to change them. It’s the little things in Wales that the Welsh Government and those that support it have forgotten about. If government is so perfect, why can’t the trains run on time in Wales? Why do constituents complain to me about roadworks starting at 1 o’clock in the morning without warning? Why isn’t information about adoption in Wales clear and easy to find? Why is everything in our daily lives such a struggle because the government is involved?

Now let me be honest – although I’m always wary when a politician says this but I think you’ll agree with me here – who cares?

I’ve been a Member of the Welsh Parliament since 2007 but prior to that I was an ordinary person who didn’t care much about the comings and goings of different politicians or the latest scandal. I was a Bank Manager in West Wales working with small businesses to help them to be successful, to provide new jobs to local people and to enable the bank to support new businesses, helping the whole area to be successful. What I cared about was the policies of different governments on how they would impact those businesses and would those policies help or hinder these fledgling businesses.

Outside of work I cared about whether or not I could afford my next car, where my wife and I would be going on holiday, would my car be damaged by that pothole round the corner, would my bins be collected as normal, what are those roadworks taking place, what’s happening with those new houses – I won’t go on and on, but these are the daily issues that people care about and that people look to all levels of government to ensure these things just happen.

I think when people end up judging the public sector for how it has dealt with Covid-19, there will be lessons for every government to learn. They will be hard lessons and they will be tough lessons. But I do worry that the Welsh Labour Government is already so keen to bash Boris, that it is more interested in the scrutiny that happens on a UK level than any it will face in Wales. Do you honestly believe Vaughan Gething thinks he has done anything wrong over the past three months?

With a single party state governing Wales for over twenty years, there has been little appetite for change. Real change, not just changing the logos or the signs on the door.

We do not live in an utopia but it has been a rare Welsh minister who ever admits programmes and money haven’t worked. You cannot fix a problem if your whole defensive attitude is part of the actual problem.  When the late Carl Sargeant had the guts to admit the failings of the Communities First programme that had consumed so much but delivered so little, he was vilified by the recipients of the funding and criticised by many in Labour just for telling the truth.

When I think about running the Welsh Government, my ambition is not just to run the same sort of government we have now. It is to transform the whole operation so that delivery and improvement are hard wired into public servants. So that innovation is promoted and rolled out, not left in silos. So that entrenched patterns of working and thinking are challenged.

I said in my conference speech to the Welsh Conservatives in Llangollen in March, that we have had devolution but now we need a revolution to make it work properly. It is not just enough to have a political revolution at the ballot box. We Conservatives don’t intend to win a Senedd election just to carry on governing in the same way that Labour has done.

When that election is done, we will govern in a way that is radical and challenging too. And while Welsh Labour puts up a slate curtain between us and England, I will be looking to England and learning from what happens there. For the last twenty years successive Welsh Governments have been at pains to learn from other governments but not their neighbour. And that includes when Labour was in power in Westminster as well as Cardiff Bay.

For example, the Prime Minister pledged in his speech to give more types of commercial premises total flexibility in planning to be repurposed through reform of the Use Classes Order. He said a building used for retail, for instance, would be able to be permanently used as a café or office without requiring a planning application and local authority approval. Boris also indicated a wider range of commercial buildings will be allowed to change to residential use without the need for a planning application. These changes are planned to come into effect by September this year and - if they are successful in England - then a Welsh Conservative Government will duplicate the very same law for Wales. We will learn from our neighbour rather than constantly striving for a so-called Welsh solution.

And the Prime Minister also pledged a new, ambitious cross-government strategy to look at how public sector land can be managed and released so it can be put to better use. This is something a Welsh Conservative government will put at the heart of our programme too. The Welsh Labour Government isn’t just too big and sluggish, it owns too much too. Yet when you ask for a list of all the land assets of the Welsh Government, none ever seems to exist. That isn’t good enough. It’s either cover up or cock up. In my first hundred days as First Minister that list of assets will be produced, classified and published.

And a Welsh Conservative Government will learn from Scotland and Northern Ireland too, especially in terms of how they revive their economy post-Covid. If there’s a good idea, my team will want to hear it, regardless of the political complexion of the place it originated.

Much has been written on the departure of Sir Mark Sedwill, the UK’s top Civil Servant as Cabinet Secretary. On top of this the story has been expanded by the resignations of other high-ranking civil servants. At the heart of all of this is once again Dominic Cummings and the UK Government’s desire to shake up the way government works. This is the right thing to do.

But love him or loathe him I can see that a dose of Dom is needed for Wales. Maybe not literally, and I can’t see me asking Boris if I can pinch him for my special adviser team, but I can very much see a Welsh Conservative Government working closely with the Prime Minister and his team to learn about how to transform government, and how we ensure a delivery agenda.

Wales needs change. Not just a change in government but a change throughout government. The next Welsh Government needs to be transformed by a dose of radicalism to bring about that change from top to bottom and deliver for the people that puts and keeps it there.

The Prime Minister has not just made a speech, he has set out a practical roadmap to its delivery. He has unveiled a new Infrastructure Delivery Taskforce, led by the Chancellor. Project Speed will bring forward proposals to deliver government’s public investment projects more strategically and efficiently.

If this approach works, then my government will do exactly the same and the structure of my Welsh Conservative government will marry the economy, taxation, procurement and infrastructure spending more closely than any that has gone before.

There is a chasm between words and action. Unfortunately, the Welsh Labour government has completely lost sight of the difference. Over a year ago they declared a Climate Emergency as part of the Any Other Business in a Cabinet Meeting. The ultimate act of virtual signalling confined to the closing discussion while someone is collecting up the tea cups and uneaten biscuits.

Yet what did declaring a Climate Emergency actually change? The only serious shift by the Welsh Government was they stopped building the vital M4 relief road. That demonstrates that even when the Welsh Labour Government is occasionally about more than words, its actual deeds are all about not doing things, rather than actually doing something.

The big ideas are always let down by the delivery. That’s why Labour announces a national forest for Wales as a big vision, but in implementing it actually only reached 6% of its tree planting target last year.

Words alone are not enough. Just because you have made a speech about something, it does not mean you have actually changed or done anything. An energetic, radical and challenging Welsh Conservative government will turn the pattern around. Less words, more deeds.

In the first five years, a Welsh Conservative government will be more radical and more revolutionary than Welsh Labour have managed in five terms. Those are words that actually mean something and which you can actually hold me to.