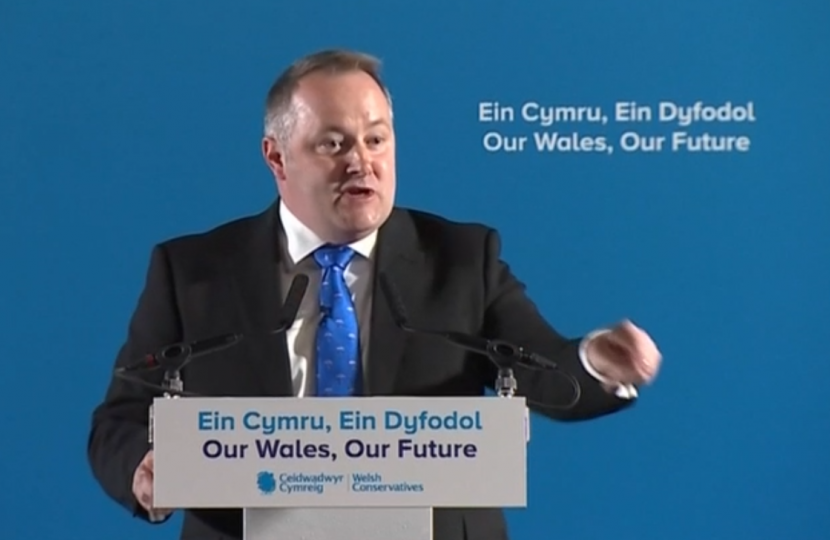 Darren Millar, Director of Policy for the Welsh Conservatives has written a landmark article titled A Change of Direction for a Better Wales

Like my friend and colleague Paul Davies, I have been thinking a lot over the last four months. Seeing how the public sector has responded to the coronavirus pandemic shows that it is possible to deliver rapid and significant change in the public sector when people are freed up to make decisions, prioritise resources and respond to challenges rather than being micro-managed and told what to do in a never ending spiral of box ticking inertia writes Darren Millar MS.

I was delighted to see Angela Burns given a key role on the Welsh Conservative front bench a week ago today with a remit to make government in Wales more resilient and efficient. She summed up the legacy of twenty years of Labour run Wales all too well: a lack of accountability, sluggish pace, patchy delivery, duplication, and waste. Dealing with each of these five problems in a meaningful way is the single biggest challenge facing us as Conservatives as I undertake the development of the manifesto to lead us into government next year. But, like Paul in his thoughtful and challenging speech, I know that before problems can be fixed, they first need to be identified.

What struck me most about Labour’s response to Paul’s speech was the fixation on a comment about Dominic Cummings. As ever they became obsessed by small detail in an attempt to distract from the main thrust of Paul’s message. They were unable to respond to the wider challenges he posed about making government more responsive, more agile and more dynamic. Their inability to acknowledge or recognise the big five problems public services in Wales face – accountability, pace, delivery, duplication and waste – proves that if you can’t recognise a problem you can’t fix it.

Along with Angela and Paul, my job as Policy Director is to pinpoint the problems and offer solutions, Over the summer the process of developing a full first draft of the Welsh Conservative manifesto will be completed and I can assure you that it won’t be Butskellism with a dragon on it. The days when you could take paragraphs from a Welsh Conservative manifesto and slot them randomly into documents by Plaid or Labour or the Lib Dems are over. Our manifesto will be a plan to bring about the devolution revolution that Wales needs. It will be the most radical and challenging programme we have ever offered to the electorate and will speak more clearly and with a more distinctly Welsh Conservative voice than at any time since the establishment of a legislature in Cardiff Bay.

What will this actually mean? It will mean a significant change that will be uncomfortable for Labour and their cronies and hangers-on in civic society because there will be a radical shake up of how money is spent, how performance is measured, and how services are delivered. Our opponents will roll the usual claptrap about our intentions as often as they pretend we are going to privatise the NHS every time an election campaign starts going wrong from them. But privatisation is not what we will be offering; radical reform within public services is what we are aiming for, and to achieve that goal the best and most versatile delivery solutions will be Welsh Conservative solutions.

In his conference speech Paul Davies talked about a slimmed down government and our manifesto will reflect that in more than just reducing the number of ministers. We need to look at each and every one of the almost two hundred quangos, agencies and advisory bodies the Labour Party has built up around itself to help to maintain its grip on the levers of power. Some hard questions need to be asked. Why do we actually need Literature Wales? What value does the Design Commission for Wales actually bring? Why is the taxpayer funding the Wales Union Learning Fund? These are hard questions not just because they are challenging but because they have never been asked before.

That is not to say we are going to be a government that doesn’t value and harness expertise. I don’t share the occasional antipathy to experts expressed by some on the right, but I do have a concern that the same experts are relied upon again and again in Wales and if we continue to listen to the same old voices, we will get the same old results.

A starting point for the Welsh Conservative Government will be abolishing the Wales Centre for Public Policy, the Labour Party’s very own sluggish think tank at the heart of its government. That will free up thinking and save two and half million pounds over five years for a start. And we’ll use that to focus on actually making things change not just pontificating about how lovely some alternative reality Welsh society might be. A revolution will always terminate the failing and the moribund, and the Wales Centre for Public Policy is on that termination list. It won’t be on its own.

And part of the devolution revolution we are aiming for needs to be cultural; both within government and outside government in the wider Welsh society. Yes, we need a cultural revolution too. That means a more open and innovative civic society in which funding and projects are won through open tender every time. It means broadening the range of delivery partners. It means ending the cosy club of Labour acolytes that have profited and sustained themselves at a cost to the taxpayer and at the expense of innovation, new expertise, and new voices.

A Welsh Conservative Government will also, as Paul said, be watching and learning from all the parts of the UK and internationally. If we are all in similar situations caused by the social and economic disruption of the pandemic, then we need to be learning from one another as we address its consequences too. Paul said on Saturday we will be looking at the changes of planning law in England to see if they work. If they do, they will be replicated in Wales. Our opponents have said that means we will just be blindly imposing policy from England on Wales but that misses a key part of our thinking: we will adopt these policies only if they work. Contrast that with Welsh Labour’s attitude. Mark Drakeford has already completely ruled out changing planning law to allow properties to move between business and residential easily, and vice versa. He has ruled it out before it has even been tried and even if it does work. I ask you this: which party sounds like the one trapped by dogma?

Of course, Mark Drakeford is very much in favour of telling us what we can’t do. His Labour government is obsessed with banning things and controlling our lives. They’ve even banned us from reading newspapers on buses! Perhaps that’s the real reason why they’ve been so slow to help Wales get back to normality; they have enjoyed controlling behaviours far too much.

This shines through in their legislation too. It’s all about banning things. Smoking outside pubs or in town centres is the latest one, but it follows a long list of bans and attempted bans, smacking kids, drinking cheaper alcohol, vaping, carrier bags and wild animals in circuses are all examples of where the Welsh Labour Government has chosen to focus its legislation. Some of these changes have been necessary and secured Welsh Conservative support, such as the aforementioned ban on wild animals in circuses, but my point is a philosophical one. What is Labour about these days if it not about banning things, controlling people, and eroding their rights?

A Welsh Conservative Government will take a different approach. That’s why our manifesto won’t focus on banning things, it will focus on enabling things and protecting people’s rights, on nurturing talent, on learning from success, on rapidly rolling out proven innovations. We will not be limited by defending the status quo, by tolerating stagnation, by wasting public money year after year, or by pleasing friends in the trade union and a heavily state subsidised charity sector as the corner stone of public policy.

That is what Paul Davies meant when he said we needed a revolution in devolution. It’s time to make devolution actually work for Wales.