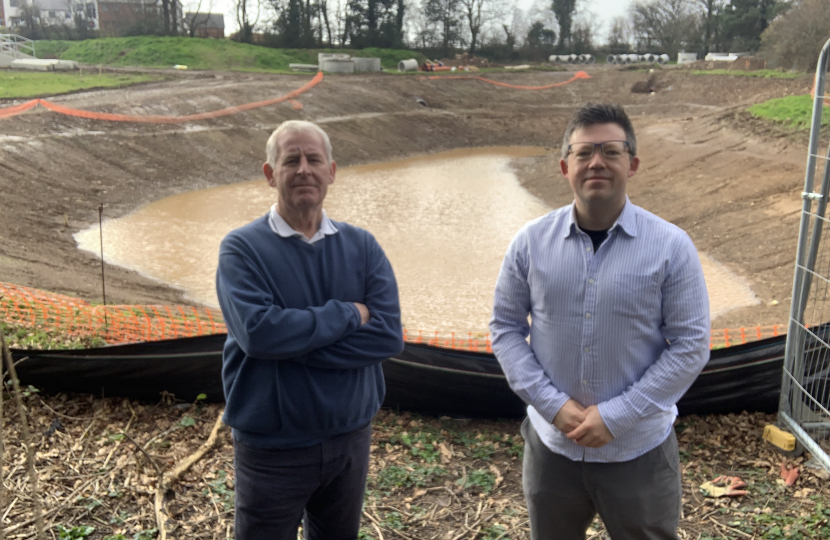 De Braose Close residents recently faced disruption from works by Welsh Water. The utility company has built an access road at the end of De Braose Close into the woods for an anticipated sewage pipe. Llandaff Conservatives have called on Welsh Water to make good the damage caused by ripping down woodland to accommodate this road.

The woodland supports biodiversity and is a stepping stone for wildlife in the Taff River Corridor that must be protected. Pressures from the Plasdwr housing development along Llantrisant Road have led to a temporary loss of parkland in Danescourt due to highways drainage issues.

Welsh Water is also seeking to expand sewage infrastructure further impacting the area. Contractors moved in without notice or consultation and almost all of the park still remains fenced off. Residents of Herbert March Close who were most effected by recent floods expressed concerns about this development.

Councillor Sean Driscoll and Matt Smith said: “We are grateful to the drainage teams to take on board concerns, make improvements and put in place ongoing maintenance plans. “We will stand up for residents put upon by Cardiff Council’s overdevelopment of green spaces.

“Communities are needlessly alienated by the sense of being ridden roughshod over by developers. “When the Labour-Plaid Cymru Welsh Government and the Labour Council are ramming through the over-development of our green spaces, actually listening to local residents through proper consultation has never been more important.

Local residents are demanding that the local community benefits from land use at the former Llandaff BBC site.